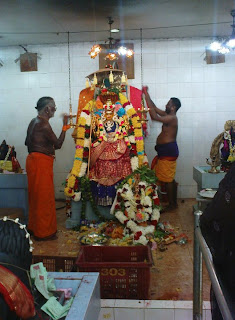 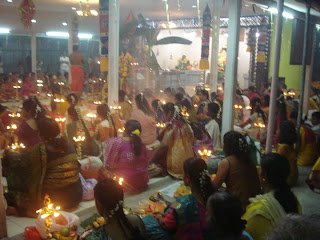 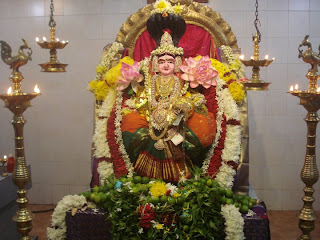 A Temple of Heritage


The temple was initiated 150 years ago by estate workers. Carbon testing on a neem tree located in the temple grounds is proof of its age. Due to the temple’s isolation, not many devotees had come to the temple. A devoted group of young Hindus took it upon themselves to gather money and perform spiritual ceremonies for the deity once a week on Friday. As time went by, the temple started getting famous due to the formation of snake mounds around the temple. Devotees are able to see these holy ‘Nagas’ (snakes) during auspicious days, like ‘Adi Puram’, 'Naga Panchami’, and ‘Navaratri’. The most pristine statue of Karumariamman lies sanctified in this charming estate temple. During the consecration ceremony of the temple, the famous Muthu Kumara Swamigal had a vision that the deity was having 5 snakes on top of her head. After which the temple committee decided to get a statue of Karumariamman. The temple committee had tirelessly searched for a granite Karumariamman statue in Malaysia, and managed to locate this beautiful sculpture in an artisan’s workshop in Penang. After negotiating, the committee secured the payment and immediately brought back the statue. The snake mound is one of the main attractions in this auspicious temple. During the month of ‘Adi’, many Hindu devotees who are childless come to this temple. Some perform ‘madi pichai’ (perform begging due to a sacred vow), and then donate the money to the temple. Staunch devotees walk barefoot from nearby villages and offer milk to the holy ‘Nagas’ (snakes). The day after ‘Adi Puram’, on ‘Naga Panchami’ the priest of this auspicious temple, Sri Sivasri Krishna Gurukkal collects the sand around the snake mound. The sand is then given as ‘prasadam’ (sacred offering) to all the devotees who have successfully completed their vows at the temple. The ‘prasadam’ is to be consumed by the childless couple, and this serves as a catalyst for childbirth. But as there is huge demand for the ‘prasadam’, all childless couples have to inform the priest prior to performing their vows.


For the photos and information

Thanks for the beautiful info on karumariamman ...om shakthi om....