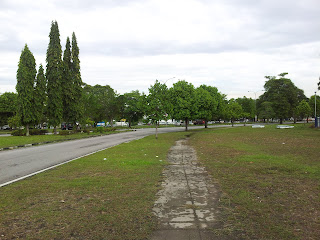 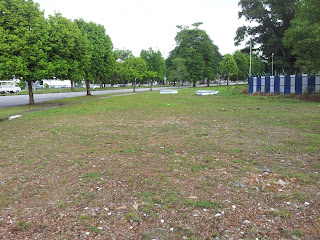 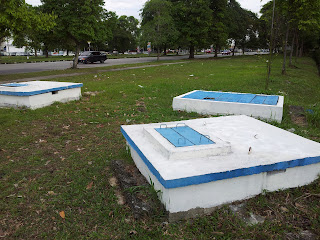 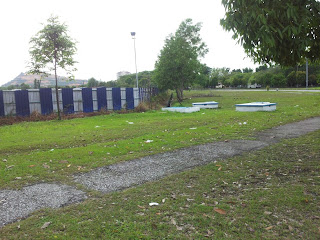 
There is a story that most people don't know and for those who know, perhaps they have forgotten to tell. It is the story of temples long before Taman Alam Megah, Hicom,Putra Heights or even Shah Alam came into being. It is a story of the Indians who lived and worked in the estates of  Sungai Renggam. Shah Alam was once known as Sungai Renggam famous for its oil palm and rubber estates.

The area known as Taman Alam Megah and part of Putra Heights was once part of the Labuan Padang estate with a notable landmark being Bukit Cermin which was the only hill which stood out overlooking vast tracts of rubber and oil palm estates.In the late eighties when Taman Alam Megah's pioneer residents moved in it was nothing more than a barren landscape newley felled for massive residential and industrial development and the only pocket of green lied on the east where a beautiful sunrise could be seen over the hills. Yes, I meant hills as Bukit Cermin had a twin sister;majestically dominating the skyline together. However, this hill was blasted into to obscurity in less than 10 years.

The 19th century temples too have vanished, leaving little trace of their existence. The first casualty of development was the 100 year old Alam Megah temple which proudly stood on a mound along Persiaran Klang but when the road was widened it was demolished (A). However it was relocated along Jalan Petaling.in 1993. The old Alam Megah Muthu Mariamman temple was demolished for the expansion of Persiaran Klang and relocated to its present site.This spot is at the junction of Persiaran Klang next to three wells (covered in blue concrete slabs) which can still be seen today (A). This was the temple's main water source for abishegam and prayers. 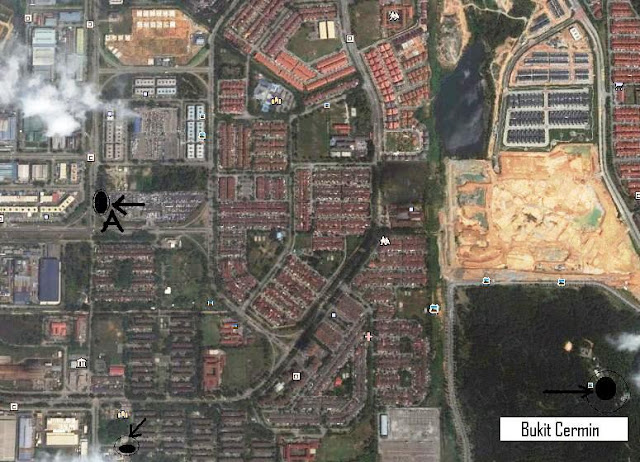 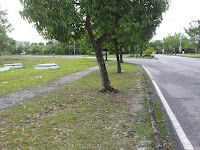 (A): The road on the right is where the temple once stood.The temple's entrance faced the wells. Visualize a small hill or mound next to the 2nd tree.
(Special thanks to Google Earth) 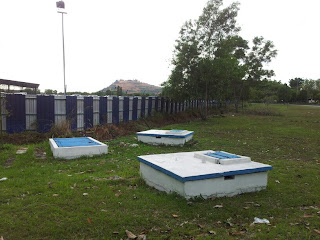 The Temple's Wells
(See A in map)


Meanwhile, a little known Mariamman temple was still operational during those years in a small community of former plantation workers.Even After the relocation of the Alam Megah temple this temple continued to function attracting droves of people from around the newly established residential areas nearby. It survived longer than the Alam Megah temple probably due to its location.This tiny village was situated behind the TRIM factory along Persiaran Klang and most people wouldn't have had the slightest knowledge that hidden behind a factory was an entire village complete with a temple of its own.. It was a beautiful heritage of all Malaysians which was worth preserving as it was unique and looked like an ancient relic due to the the huge roots of old Banyan trees growing on its walls. The century old walls were held together by giant roots and it felt almost magical. Needless to say, this temple was also more than a 100 years old at that time itself. Less than a decatde ago this temple lost its battle for survival and the land where it once stood lays barren awaiting future development.

The last temple standing is the Kaliamman Temple of Bukit Cermin or "Kannadi Malai". It has survived all these years due to its inaccessibility as it is at the summit of the hill but now the next wave of development is taking place and this development may lay siege once again to the last bastion of this lanscape's heritage and history.

Locals called the hill Bukit Cermin, or Kannadi Malai (in Tamil) and the early settlers of Taman Alam Megah fondly adopted that name as they were proud to have a green lung in the middle of otherwise a barren landscape newly cleared for development and the subsequent sprouting of industries along with its pollution made the hill more valuable than ever before.. 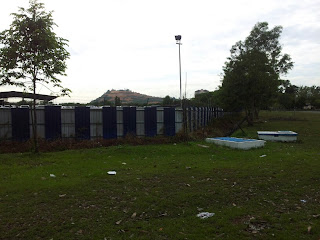 (Bukit cermin in the background)


Locals who once tapped rubber in the vast rubber estates which covered modern day Alam Megah and Putra Heights speak of their challenging experiences namely those which involved the trail up Bukit Cermin. They started their journey near the foothill where the old Alam Megah Temple stood and ended it at the top of Bukit Cermin where the Kaliamman Temple is located. Both these temples were a symbol of hope and guidance for those brave men and women who worked in the early hours of the day with no navigation tools to lead them or protection against wild animals. 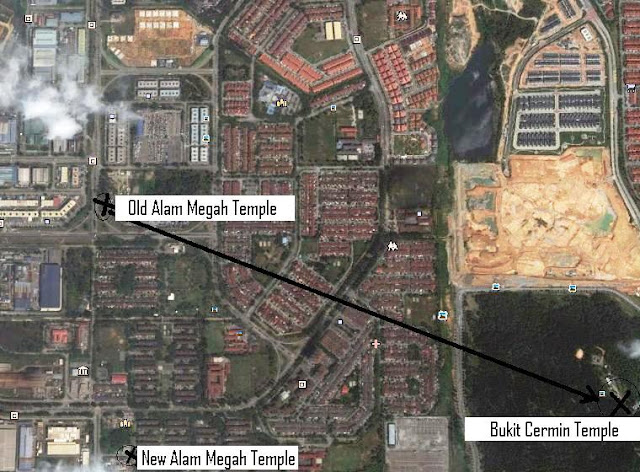 Special thanks to Google Earth

This journey tested both faith and endurance and temples played an important role in providing them with a sense of security.There are even colonial era stories of people getting lost atop Bukit Cermin but folktales or true stories, we may never know. However, one thing is certain; they were always fearful of their safety especially when ascending and descending this legendary hill.