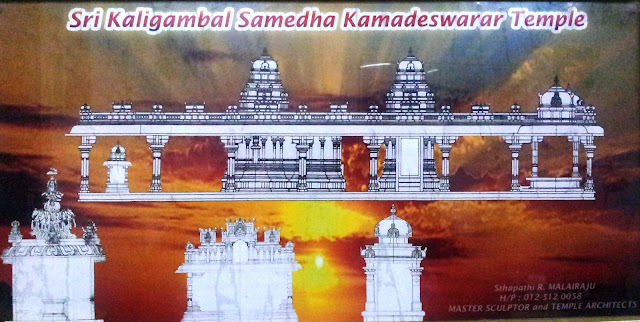 Built sometime in 1886 by the plantation workers of Ebor Estate, it was one of the two main temples of the estate. The bigger Sri Maha Mariamman temple was bulldozed flat by a property developer on July, 14 1998 and this temple was burnt down in an arson attack in 2003. Finally in 2009, after a prolonged battle with the developer an alternate site was given for the relocation of this temple.The photos below are of the relocated temple which is a simple temporary structure. Construction of a permanent structure at the same site a few metres away is ongoing. Above is an impressive architect's image of what is to come. 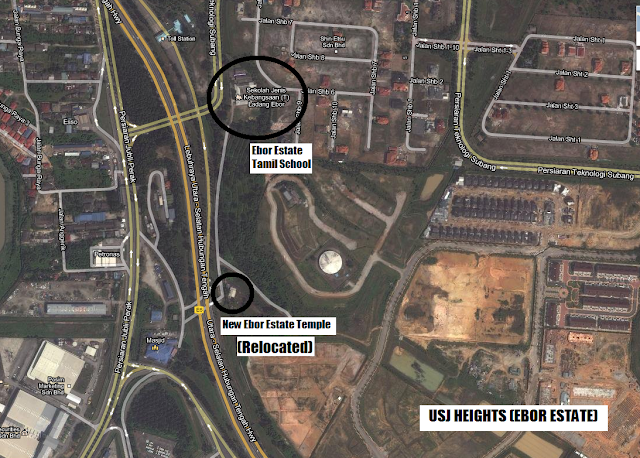 The last remains of an identity; both School and Temple, relocated.
Thanks to google maps and google earth 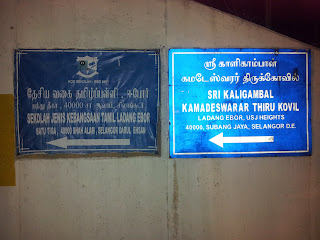 View of the temple from the North-South Highway 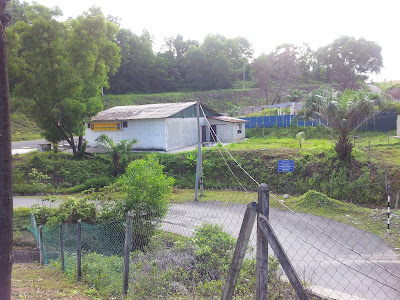 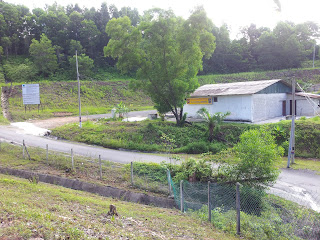 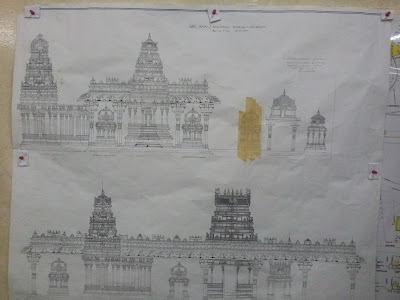 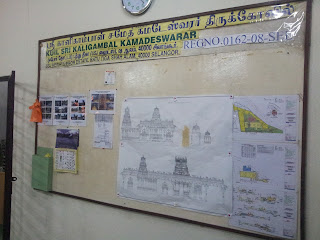 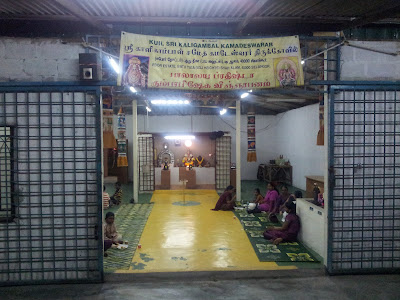 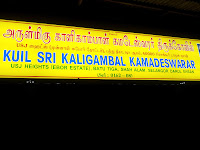 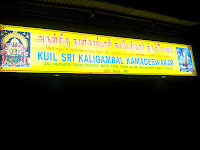 The history of the Ebor Estate Temple via You Tube

A TALE OF AN OLD ESTATE TEMPLE
by Indrani Kopal


In the early hours of June 14, 2003, a group of thugs torched the Sri Kalikambal Kamadeswarar temple at the Ebor Estate in Batu Tiga, Shah Alam.

These thugs were allegedly aided by a few men in police uniforms who intimidated and threatened the Hindu devotees in the temple with arrest when they tried to prevent the arson attack.

The devotees suspected that a property developer was behind the attempt to destroy their temple which they claim was built in 1886 when their ancestors began to settle on the plantation.

The estate communitys problems started in 1990 when the plantation was sold off for property development.

Originally, there were two temples in Ebor Estate. The bigger Sri Maha Mariamman Kovil was bulldozed flat by a property developer on July, 14 1998 and this, too. without the communitys knowledge.

Caught by surprise, the devotees were forced to shift the demolished temple's deities to the nearby Sri Kalikambal Kamadeswarar Kovil.

After the arson attack on June 14, former Ebor Estate residents decided to organise themselves to wage a sustained campaign to save their remaining temple.Since then, they have lodged numerous police reports, sent memorandums to federal and state government leaders and made several attempts to negotiate with the property developer and the land owner.

The case of Ebor Estate's Sri Kalikambal Kamadeswarar Kovil is perhaps typical of the dire threats facing estate temples throughout the country. Especially so for those near urban areas where rapid property development has displaced plantation communities.

This temple is just one of the thousands of unregistered temples dotting the country. As of 2003, there were 17,000 such temples.

These temples were built in the late 19th and early 20th centuries by migrant Tamil workers when they settled in new land clearings and laid the foundations for the nation's modern plantations which support the economy today.

Over the years, these temples have become repositories for their history, culture and identity, all embodying the sacred ethos of these local communities.

The Sri Kalikambal Kamadeswarar Kovil story is very much the history of many temples in the country. As urban centres grew, plantations made way for housing estates, golf courses and other modern amenities. Apparently, there is no place for temples in this new scheme of things.

Four years after the torching incident, Malaysiakini visited the temple, or what is left of it. Property development activities are rapidly progressing around the temple.

S Suthantiran, a former Ebor Estate worker and resident who heads the temple committee, says it had been a long arduous struggle to save their temple. The committee, he said, was persistent and refused to budge until a piece of land was allocated for the temple.

After numerous meetings over several years, the developer for the housing project agreed in 2007 to give an alternative piece of land for the temple and bear its relocation cost. But the documentation and legal procedures were to take some more time.

Malaysiakini has been following up with the progress and on March 8, 2009, the temple was officially relocated to a temporary site after a simple religious ceremony attended by members of parliament, assembly persons and the developers representatives. Construction of a permanent structure at the same site will begin once the committee raises sufficient funds.